In historical sources Vėžaičia Manor was mentioned from the beginning of the 18th century to the first half of the 20th century. It belonged to the counts Volmeriai. The ensemble of Vėžaičiai Manor buildings is Vėžaičiai Manor estate of architectural, historical and urban value. The complex consists of a park, a gamekeeper’s house, two gates, stables, a gatehouse, a vodka distillery, a cow shed, a barn, a residence and a chapel.

The park of mixed planning was settled in the western part of the settlement, in the territory of counts Volmeriai estate place, near the stream Skinija at the end of the 19th century. The ensemble of the former Manor estate is situated on the left bank of the stream. The main park alley gently winds at the lowe terrace of Skinija  bank. 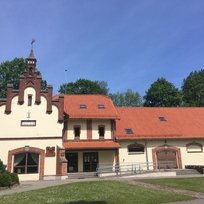