23 km long and 2-3 m deep channel begins at the sluice fitted near Lankupiai village and stops at the Wood Bay in Klaipėda port. Channel digging and construction works commenced for the money collected as state tax in 1863. The channel sluice was fitted at the source of the channel (in Lankupiai village) in order to even the difference in sea-levels. Today the channel of Wilhelm is becoming a more and more popular course of water tourism and a place of recreational fishing.

Lankupiai lock is the only sluice in Lithuania announced to be a technical monument. 10 light metal bridges were built across the channel during the period of 1902 and 1904. After World War II the channel was embanked and it served as a water reservoir. Lankupiai lock has not entirely lost its function; however, it is rarely used to its purpose. 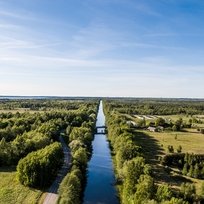