The Kalniškės Hillfort on the left bank of the river goes back to the roots of the town and its high points provide a stunning panoramic view to the locals and guests of the town.

The initial location of Kalniškė hillfort, also known as Gargždai or Anielinas, was in front of the modern town on the territory of Kalniškė Village across the marshy valley of Minija River.

The valley is often flooded in springtime and therefore the hillfort is hard to reach from the town. Citizens of Gargždai are dreaming of a bridge leading to the hillfort directly from the town, but as long as this idea remains unrealised, the hillfort can be reached by the Old Samogitian Highway turning northwards on the left bank of Minija River.

The hillfort is called Pilalė (the Castle). It has benn arranged on a long and narrow highland point. Its 100 m long and 13-30 m wide top located at the wetern end of the point is protected from the highland with a cascade of ditches and ramparts forming 4 entrechment lines in total. These 60 m wide defences show that formerly the hillfort hosted a mighty castle protected from the valley side bu steep slopes of 20 m high.

The hillfort has not benn researched. In 1998 archaeologist Povilas Tebelškis (1950-2003) performed only a minor survey at the foot settlement located on its western side. He found up to 0,95 m thick cultural layer containing hand-made and thrown pottery fragments and other minor artefacts dating back to the second half of the 1st millennium - early 2nd millennium A.D. These excavations validated conection of the hillfort with the Gargždai Castle (Latin - Garisda) mentioned in 1253. Maintenance of the name implies that since the 13th century its history had benn uninterrupted and inhabitants of the hillfort carrie the name of their castle to the town established in the 16th century.

However, the initial history of Gargždai has sunk into the depth of the hill as the chest of treasures which, according to the local place-legends, was swallowed by hillfortwhen a priest went by with the Sacred and burning candles in some Easter morning. 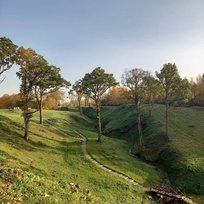 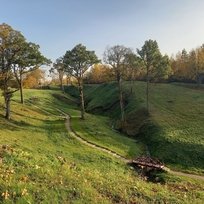 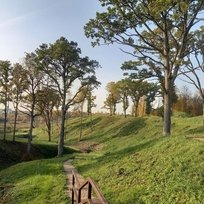