Dovilai hillfort hides in the Forest located on the right bank of Minija River and can be found only following the signs leading to the hillfort from the settlement of Dovilai.

Once it used to be a true local well-known place, as we can guess about it from the variety oflocal names of the hillfort (the Castle Hill, Pelutė Hill, Muškalnis etc.) and nearly twenty place-legends telling relevant stories. One of them said that there used to be a well on the hillfort. Sheperds thought that there were treasures hidden there, so the smallest of them climbed down to check it by the rope. When he got to bottom, he found a gate and met an old man, who led the boy inside, gave him good food and showed around a magnificent golden palace, in which the boy found himself. Then he led the boy out of the cave, but swore him not to tell anyone what he had seen. When the masters saw the little shepherd alive, they were greatly surprised as he was missing for three days. And when they started asking him where he had benn, the boy told everything and since that moment he became mute. Such place-legend was recorded already before the World War II.

In 1944 the hillfort was included into Klaipėda city defence line: a trench was excavated along the eastern edge of its tops; on the ramparts the so called Koch bunkers (machine-gun positions) were built, and an anti-tank trench-and-rampart line was arranged at its foot. 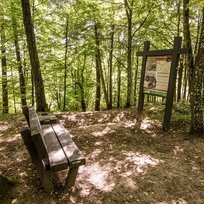