Hillfort top forms uneven 110 m long and 105 m wide quadrant surrounded with a semi-circular 130 m long, 8 m high and 22 m wide rampart covering its northern side. On the external side of the rampart, there are remains of another smaller rampart and according to the excavation findings of 1972 there were three more ramparts with ditches in-between them. This wide (up to 20 m) entrenchment line blocked access to the external 9 m high slope of the main rampart from the highland. The hillfort was protected by 10-20 m high steep slopes (presentry, as the water level in the pond has risen their height makes only 8-9 m) and a small rampart along the edge of the hillfort top from the side of Eketė Brook.

Hillfort used to host the Curonian castle Eketė (Latin - Akutte) mentioned in 1253 in the Act on the Curonian Land Distribution. The size of the hillfort implies that it had to be a fortified city centre rather than a castle, especially considering that northwards from the hillfort there was an ancient settlement covering the territory of at least 6 ha. Eketė hillfort is the best-researched hillfort of Klaipėda District.

In 1972 archaeoogist Algimantas Merkecičius (1933-2014) aurveyed a 240 m2 area in the eastern part of the hillfort top and found a 0,3-1,4 m thick cultural layer rich with artefacts and construction remains. Among the most interesting findings there was a kit of iron carpentry tools (a chisel, an adze, a piercer and a drawing-knife) implying that excavations uncovered a carpentry workshop. Other findings were a socketed arrowhead, Roman coins, an amber spindle, glass beads and ceramic weights for a vertival loom. There findings, as well as even, rough and thrown pottery, imply that the hillfort was inhabited for over a thousand years - from the early 1st millennium A.D. till the mid13th century.

A thick (up to 0,7 m) cultural layer dating back to the period can be found both on the hillfort top and at the settelent site surveyed in 1972 and later investigated further. The treasures of the main rampart surmounting the hillfort remain unrevealed. 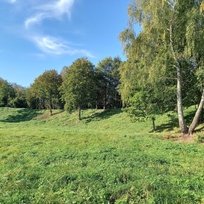